Continuing a Tradition of Student Journalism 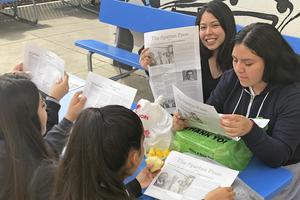 Several enterprising students, led by Daniella Arevalo ‘21, recently celebrated the first issue of ICA Cristo Rey’s new student newspaper, entitled The Spartan Press. These students also did some research into the history of student journalism at the school. ICA’s first student newspaper began in 1890. It was called The School Echo; it became The Megaphone in 1929; and it continued to run under that title for several decades.

Several enterprising students, led by Daniella Arevalo ‘21, recently celebrated the first issue of ICA Cristo Rey’s new student newspaper, entitled The Spartan Press. These students also did some research into the history of student journalism at the school.

ICA’s first student newspaper began in 1890--129 years ago! It was called The School Echo and, according to a 1906 issue, it “contain[ed] a complete record of all that [had] transpired at the Academy… as well as much meritorious literary work.”

The School Echo became The Megaphone in 1929, and continued to run under that title for several decades. Susan Sutton ‘89, currently an English Instructor and Newspaper Advisor at Archbishop Riordan High School, attended ICA and worked on The Megaphone. While Ms. Sutton attended ICA, students were invited to join the newspaper with a letter of invitation known as the “golden ticket.”

The Megaphone served as a place where students could discover and foster their love of journalism and report on a wide variety of stories, ranging from local earthquakes to school dances to unusual incidents on campus. Ms. Sutton recalled a story titled “The Great Convent Robbery,” when one of the students got her purse stolen by a passerby on Guerrero Street. She quoted the writer of the article: “Maribelle and I wanted to run after the thief, but Sister wouldn’t let us.” Most of the content in The Megaphone dealt with on-campus news, and she says that the convent robbery was an example of one of its most “hard-hitting” stories.

Ms. Lemery Reyes ‘00 started her journalism journey at ICA as a reporter during her sophomore year and worked her way up to being the Editor-in-Chief of The Megaphone during her senior year. Her first memory was printing out stories on regular printer paper and stapling them together: “The thing I remember is that our first paper… we just ended up stapling a couple of pages together and put something together really fast. I remember I thought, oh, this is interesting for a newspaper,” she says, “It ended up being a foldout, like a regular paper.”

Ms. Sutton and Ms. Reyes’s stories raise an interesting question: what obstacles did the student newspaper face that caused it to disappear?

To answer this question, we turned to Ms. Mary Cerutti, former English Department Chair and Newspaper Advisor, who said that the main issue with The Megaphone was expense: “Back then, we were publishing on paper, not online, and we had to take the paper to a printer on 16th & Alabama to be printed… It was getting really expensive, so we stopped,” she says, “People were disappointed but understood the financial realities.” These financial realities, coupled with the transition to the Cristo Rey Network and the change in student schedules with the new work-study program, meant an unfortunate end for The Megaphone.

And so, student journalism at ICA Cristo Rey would be on pause for more than a decade until the creation of The Spartan Press in 2019.

Read all of the Spartan Press’s articles at icaspartanpress.com