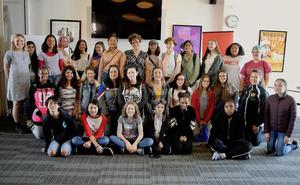 Earlier this summer, some aspiring writers from ICA Cristo Rey attended a workshop with Nicole Perlman. Ms. Perlman wrote Marvel’s Guardians of the Galaxy and Captain Marvel, and is the first woman to write a Marvel Studios film.


Four ICA Cristo Rey students joined a group of young women from across the Bay Area, all of whom came to learn from Ms. Perlman’s expertise. Rising junior Daniella Arevalo said, “Something I enjoyed about the writing workshop was seeing and being surrounded by other young women who were interested in and passionate about writing. I had never experienced that before.”


Ms. Perlman spoke about the process of screenwriting and working within the industry, and also got into specifics about writing for the Marvel franchise. According to Daniella, “she was given stacks of comic books.... to choose characters from. That’s how she wrote Guardians of the Galaxy.”


Ms. Perlman even spoke about overcoming the setback of having a director “butcher your screenplay.” Daniella said this was “interesting to hear her talk about.”


Daniella (who is also the Editor-in-Chief of the Spartan Press, ICA Cristo Rey’s student newspaper) and the other ICA Cristo Rey attendees have goals of their own within writing and the arts. Daniella said, “Seeing Ms. Perlman in front of me as an established, successful screenwriter motivated me to keep working hard so that I could be one, too. As a young woman of color, I don’t get too many mainstream role models to look up to for writing, and even though we aren’t exactly the same, her accomplishments are encouraging.”


With all of their creative ambitions, ICA Cristo Rey’s young writers are also fans at the end of the day. Daniella’s closing reflection was: “Getting to talk to the woman behind the movies that so many people love is an experience that I’m really grateful for.”