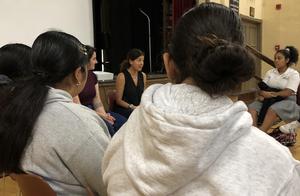 Power Meri, as described on the film’s website, “follows Papua New Guinea’s first national women’s rugby league team, the PNG Orchids, on their journey to the 2017 World Cup in Australia. These trailblazers must beat not only the sporting competition, but also intense sexism, a lack of funding, and national prejudice to reach their biggest stage yet.

Human rights organisations describe Australia’s nearest neighbour, Papua New Guinea, as one of the worst places in the world to be a woman. But where international observers see despair, the pioneering players of the country’s new national women’s rugby league team, the PNG Orchids, see opportunity.”


Recently in conjunction with the SF Film Society and the Women Sports Film festival, ICA Cristo Rey students had the opportunity to watch Power Meri and chat with the film’s Director, Joanna Lester. Ms. Lester shared this about the experience of coming to our campus: “Being based in Australia and having made a film about Papua New Guinea (PNG), being able to visit schools on the other side of the world, to share Papua New Guinea’s story in a country where people probably rarely think about Papua New Guinea is amazing. Being able to meet students in the U.S. context, and going back to Papua New Guinea and talking about this with the team and sharing how students have reacted will be such a special thing. For the team to know that people are interested in their story and following them from now on is huge. It’s an impact film, being made for the purpose of creating conversation and helping to change attitudes in some context and doing that in other countries is really important.”


In the small-group discussion, students and staff asked about some of the practicalities, like the process of getting funding (lots of writing proposals and filming teasers), the time it took to film and edit/produce (months for filming with another year for edits), and questions around larger themes like access to stories, the impact of social media, and being a woman in different professional fields.


A journalist by trade, Joanna Lester spoke more to her experience as a rugby journalist. This was her first women’s team. “I’d be the only female journalist at a press conference,” she said, remembering how at her first team press conference the coach walked up and asked if she wanted to interview him first, figuring she’d get pushed to the back otherwise. “I’ve worked on men’s teams as a media manager member which had twenty-four male payers, ten male staff and me,” Ms. Lester said Her advice for students: “When you enter something new, have it be a particular niche, something you know, something [where] you’re confident in what you know, and put yourself forward.”