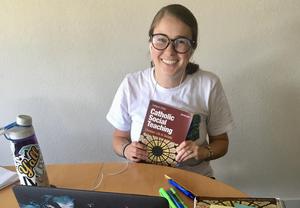 Kerrin McKenney has always known she wanted to be a teacher, “My mom is a teacher and I was that kid who would have friends over to play school.” As her own education focused on English and secondary education she also started working with justice issues. She has earned a Masters in Human Rights Education from the University of San Francisco. This year she is among the Class of 2020 graduates who are looking at different sorts of graduation ceremonies.  In this her third year at ICA Cristo Rey, Ms. McKenney is teaching both a Social Justice course and an Advanced Placement (AP)  Seminar course aligning her personal passion for justice issues with her career.


Ms. McKenney was an active participant in her college campus ministry and her own Catholic faith while valuing the importance of public education as a means for providing for everyone. After her placement in the Berkeley/Oakland area with the Jesuit Volunteer Corps (JVC), “coming to ICA Cristo Rey provided the opportunity to marry both my love of Catholic schools and access to quality education for those in underserved communities.”


“I’ve been so impressed with the work the students have been doing during our current distance learning,” Kerrin said of her AP classes. “Leading into it we’d finished analyzing the texts in the stimulus packet they’d received.” There are materials related to a similar theme; including art pieces, literature, philosophical treatises, and other resources. “The work they’ve done from last semester has prepared them for this. Distance learning is letting them see the fruits of their labor, and I don’t feel like I’m abandoning them. Daily interaction was already pretty independent; the students have been doing great with it!


In her Social Justice course, described as an ethics and morality class with a Catholic Social Teaching lens, Kerrin notes most, her students’ capacity for growth. “Teaching a research paper remotely has been a challenge, but they have also risen to the occasion. Now kids are learning how to ask for help because they can’t just stop by the classroom. Adults can struggle so it’s a valuable skill to develop this early in their lives.


“Learning how to ask compounded by information overload is a lot,” Ms. McKenney remarked. “I know they are doing hard work on topics related to human dignity. But this has changed my perception of who I am as a teacher. I want to be talking to them but also I’m trying to be responsive to not taking their time if they don’t really need my input.


“When I do check in with them, they are excited and happy to check-in. Between the two courses the students are so passionate and eager to talk about their topics and projects. Having one on one appointment slots made me feel like I was doing my job.” Kerrin said, referencing again the new sense of identity. “I learn so much from them about their topics. even ones who are behind are open about what is getting in their way and then I help them plan.


“The students have been sincerely asking how I am, too, during all of this. It’s just great to interact with them as humans.”