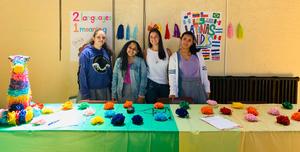 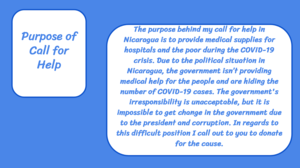 While COVID-19 cases are rising and we’re dealing with timeline changes for reopening in San Francisco and California, one ICA Cristo Rey student’s thoughts are with the country of Nicaragua, a Central American country situated between Honduras and Costa Rica.

Rising senior Luisana Morales has been a tenacious and community-driven student during her time at ICA Cristo Rey. She will be the Block Society president at the start of the 2020-2021 school year, as well as actively participating with her Spartan sisters in several clubs including Las Latinas Unidas, Ambassadors, and Two Languages One Meaning. She has also been a Student Council member.

Luisana, along with her family, has a summer plan to fundraise for Fundación Violeta Barrios de Chamorro in Nicaragua.

La Fundacion Violeta Barrios de Chammorro has a mission: “Together with citizens, journalists and society construct a culture of democracy and develop a society based on respect for social liberties and justice.”

“They will buy the medical equipment and then give it to doctors and the poor people in Nicaragua who don’t really have the resources to protect themselves and take care of themselves from COVID,” said Luisana about why she was interested in focusing her efforts on this organization.

The Nicaraguan government has been reckless in its response to the coronavirus pandemic, refusing to promote even the basics of social distancing.

According to the LA Times “Schools and businesses remained open as Daniel Ortega, President of Nicaragua encouraged residents to attend concerts, parades, and sporting events.

Obviously Social Distancing on an individual level is the process of increasing distance between individuals to decrease the risk of spreading disease. There is also a group level that involves canceling group events where people would be in close contact. And these events encouraged by the government obviously don’t allow for such practices.


Luisana’s immediate family is here in the San Francisco Bay, and she has an extended family in  Nicaragua. This informs her involvement and passion for her summer project to support the foundation and its mission.

“My family, we listen a lot to the news and also I have family over there. And just hearing all the things that happen just due to the political state and lack of health care... It just really touched my heart. We used to take these kinds of things for granted. But health care over there hasn’t been well even before COVID,” said Luisana.

A rise in “express burials” gives credence to fears of a government coverup. With a rise in pneumonia cases and respiratory infections and doctors commenting on condition of anonymity as other doctors have been fired for speaking out.

“You go to the hospital and you’d expect it to be a safe zone for you, but you’re even more likely to get sick,” Luisana lamented. “My grandma told me that she went out and could just see people fall on the floor or faint, you could be going to the market and you see someone faint and then they just die there. They don’t even have soap, some people don’t even have water in their homes. It’s really heartbreaking.”

Nicaraguans have been forced to implement their own COVID response and this is where Fundación Violeta Barrios de Chamorro comes into play for Luisana.

“Also not having anything to do [because of San Francisco’s stay-at-home efforts] and not being able to do anything for them and just listening to the news made me feel like a hypocrite for just feeling bad. I like to take action,” Luisana affirmed. “I don’t want to think ‘oh I feel so bad’ and just post about it on social media. I like to take matters into hand and do something about it.”

Luisana’s time in the Las Latinas Unidas club, including their support of families at the U.S. border with a blanket drive, along with Refugees Welcome, another club at ICA Cristo Rey, was important in helping her realize she not only needed to but could do something about the issues facing Nicaragua.

“The government isn’t supporting people and [they are] hiding cases of COVID so for something to happen [it will be] by doing something ourselves in the community,” Luisana added.


The vision for service


“My mom was born [in Nicaragua] and she has friends still living there who work at the foundation,” said Luisana about choosing this foundation.

Originally Luisana planned to collect medical supplies to send over, but after a conversation with members of the foundation, she was encouraged to take a different approach.

“I’m still talking with them. It’s kind of hard to contact them [because of the extra cost of an international call]. We’re still following up on this.

“It’s not a great idea to send supplies because of the government [and how they’d handle international supplies]... We’re going to send out letters to ask for money for the cause and then if people follow up, I’ll share a presentation I made with the reasons behind [what we’re doing] and who it’ll be going to. Also, I’ll be posting on social media to get [the word] out there. ”


“My mom and dad, when they were younger and lived in Nicaragua, my dad was part of the Sandinista military and they tell me about choices they made and show me how to respond to injustice. They helped to form me into the advocate that I am,” Luisana affirmed.

What is the Sandinista movement?  Sandinista, member of Sandinista National Liberation Front, Spanish Frente Sandinista de Liberación Nacional (FSLN), one of the Nicaraguan groups that overthrew President Anastasio Somoza Debayle in 1979, ending 46 years of dictatorship by the Somoza family.

With her family and other Nicaraguan community members in the Bay Area, she has demonstrated outside of the Nicaraguan embassy as well. She remembers in particular protesting the government response to young activists in Nicaragua.

“The older people weren’t getting their Dinero de Retiro [retirement funds] in 2018 and this is still going on. The youth started peaceful demonstrations against it and then the government police started going out and killing the youth.

“I helped plan that [protest], but I’ve been to other ones planned by others,” Luisana went on to say.

Luisana’s faith and spirituality have played a role in her realizing her vision as well: “We’ve had community masses, taking faith into the plan as well, like Rosary Rallies, where you pray a rosary [a set of prayers] in the name of the [bad] situation to end.” She calls herself “a Catholic advocate.”


In the summer before her senior year, Luisana is keeping her plans practical and realistic: “It would be nice to have [the donations] ongoing because there is so much need, but the focus is this summer.”