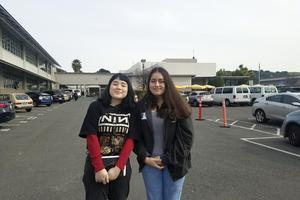 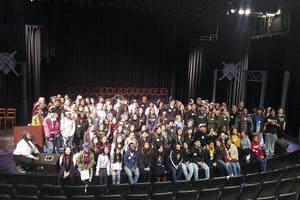 
Bishop O’Dowd’s Solidarity in Action Leadership Team, along with St. Ignatius’s Arrupe Council, the Ignatian Solidarity Network, and Moreau High School, hosted the Fourth Annual Bay Area Teach-In for Social Justice on January 26, 2019 at Bishop O’Dowd High School in Oakland. Julianne Pearson, from ICA Cristo Rey’s Corporate Work Study Program, said, “It was so great to see kids from all over the Bay Area--not just our own--who were so alive with a spirit for Social Justice, and full of such great ideas.”


Ty also said, “I really liked the workshops. I went to one on the housing crisis and one about mass incarcerations. [The speakers] shared ways to be part of the process for change.” The keynote speaker at the event was Bria Smith, a high school senior from Milwaukee, Wisconsin, who plays an influential role in the “March for Our Lives” movement. “With her experience of living in a black suburban community while attending a predominantly white school, she told us she learned she had to speak out when people were saying racist things, even when they didn’t know they were being racist.  She has become involved in a lot of activist work. She was really inspirational,” Ty remarked.


After the Teach-In, the four Cristo Rey Schools joined together at the St. Elizabeth campus of De La Salle Cristo Rey in the Fruitvale neighborhood of Oakland. Following a tour of their facilities, the school’s freshmen took their Cristo Rey sisters and brothers out into the neighborhood. “We all went for tacos!” exclaimed Ty. She continued emphatically: “It was really nice to talk about what it’s like to be us. Some of our other friends have a high school experience that is just different, so it was nice to talk with people who go to school and go to work, and are handling it.”